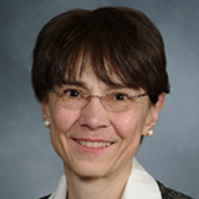 Dr. Amy Chadburn is an outstanding diagnostic hematopathologist who is well liked by the local hematopathologists/oncologists for her daily contributions to patient care.  She is widely respected within the hematopathology community nationwide.  Her peers have voted her to be included in the Castle-Connolly Best Doctors in the New York metropolitan area for the last three years.  The United States and Canadian Academy of Pathology has asked her to serve on their abstract review board and to moderate numerous scientific sessions.  She has been invited to lecture throughout the United States and Europe on the areas of her special expertise, namely immunodeficiency-associated lymphoproliferative disorders. In addition to her clinical diagnostic expertise, and in spite of her large clinical service demands, Dr. Amy Chadburn has relentlessly pursued the scientific investigation of lymphoproliferative disorders throughout her career.  She has collaborated with a large number of investigative activities which has resulted in more than 50 original publications.  She has published numerous other original articles in her own right or with other collaborators.  She received the coveted Arthur Purdy Stout Award in 1992 for the best paper published in the pathology literature by a pathologist under the age of 40.  Her scholarly contributions cover virtually the entire range of lymphoproliferative disease.  She is however best recognized nationally for her contributions to our understanding of AIDS-associated lymphoid neoplasia, post-transplantation lymphoproliferative disorders and the applications of flow cytometric and immunohistochemical technologies to the diagnosis, classification, and investigation of lymphoid neoplasia.