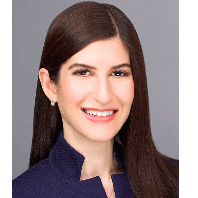 Dr. Rosenbaum has devoted her career to the treatment and care of patients with plasma cell dyscrasias, including multiple myeloma and amyloidosis. She is actively involved in clinical and translational research in these conditions, and has served as principle or co-investigator on numerous clinical research trials that incorporate novel therapies for her patients. Dr. Rosenbaum received her undergraduate B.A. from Columbia University and medical degree with honors from the University of Illinois College of Medicine. She then received her training in Internal Medicine at the University of Chicago, where she also completed her combined fellowship in Hematology and Medical Oncology.After completing her clinical training, she joined the faculty at the University of Chicago in 2008. Developing a combined multiple myeloma/amyloidosis program, she made several important contributions to clinical research in both diseases. She also worked closely with the National Cancer Institute and researchers at the national level to develop cancer clinical trials for new therapies in multiple myeloma, lymphoma and leukemia as well as stem cell transplantation while serving as Executive Officer of the oncology clinical research organization, the Alliance for Clinical Trials in Oncology, formerly Cancer and Leukemia Group B (CALGB). She was recruited to the full-time faculty of Weill Cornell Medical College and New York-Presbyterian Hospital in 2017.At Weill Cornell Medicine, Dr. Rosenbaum treats all stages of multiple myeloma and amyloidosis including cardiac amyloidosis. She specializes in the care of complications of multiple myeloma and amyloidosis, working closely with radiation oncologists, surgeons, cardiologists and other specialists to support an integrated approach to patient care along with performing stem cell transplantation for myeloma and amyloidosisDr. Rosenbaum has published peer-reviewed articles, reviews, editorials and book chapters and has been an invited speaker at numerous conferences. She is a member of several scientific organizations including the American Society of Hematology, International Myeloma Society and the International Society of Amyloidosis and is active with amyloidosis support groups and multiple myeloma awareness programs such as the International Myeloma Foundation.