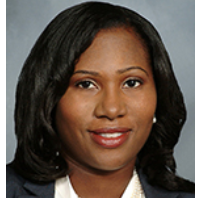 Dr. Eloise Chapman-Davis obtained her bachelor's degree with honors from Stony Brook University and earned her medical degree from Stony Brook University School of Medicine, graduating alpha omega alpha (AOA). She completed her residency in Obstetrics and Gynecology at Harvard University Brigham & Women's Hospital/Massachusetts General Hospital integrated program. She subsequently completed her fellowship in gynecologic oncology at Northwestern University Prentice Women’s Hospital.Dr. Chapman is extensively trained in minimally invasive surgical approaches using robotics and laparoscopy for treatment of gynecologic cancers and complex benign gynecologic diseases. She has presented research on minimally invasive techniques for treatment of endometrial cancers and adnexal masses at local and national meetings. She has been extensively involved in resident education, focusing on minimally invasive techniques utilizing the daVinci robotic platform and single port techniques. Dr. Chapman focuses on early detection and prevention strategies for women at high risk for ovarian and /or endometrial cancers and HPV related diseases. She has publications related to HPV education and has given multiple lectures to both the community and physicians on cancer risks. She is also dedicated to providing treatment for women internationally, providing both surgical management and basic health care to patients in various countries. She has participated in medical missions in the Caribbean, Central America, and Africa.

Eve McDavid, 34, and her husband, Matt, began the year 2020 like many of us: full of hope, unaware that the viral outbreak that was taking hold across the world would change history. They were preparing for a joyous arrival: the impending birth of their second child. At 35 weeks of pregnancy, however, Eve received a surprising diagnosis. She learned she had stage 2B cervical cancer. And it was growing very fast. Thanks to the team of experts at NewYork-Presbyterian/Weill Cornell Medical Center, today Eve is in remission, and their now one-year-old son, Arthur, happily plays with his 3-year-old sister, Ruby Ann, at their home on Long Island.