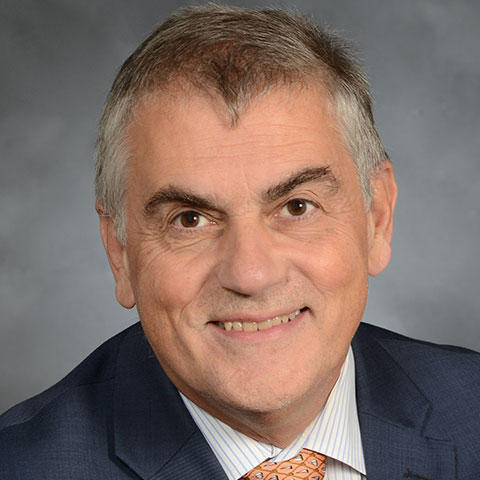 Giuseppe Giaccone, MD, PhD, is an internationally recognized expert in the field of lung cancer and developmental therapeutics. In September 2019, he joined Weill Cornell Medicine and NewYork-Presbyterian Hospital as Chief of Thoracic Oncology and Associate Director for Clinical Research at the Sandra and Edward Meyer Cancer Center. He also directs the phase I clinical trial program for early drug development.

Dr. Giaccone received his MD cum laude from the University of Torino Medical School in 1980, followed by training in clinical oncology and internal medicine, which he completed at the University of Torino in 1988. He spent the next two years in the National Cancer Institute’s (NCI) Medical Oncology Branch under the direction of Dr. John Minna. Following his training at the NCI, Dr. Giaccone received his PhD from the Vrije University Medical Center in Amsterdam, The Netherlands. He served as a senior medical oncologist at the Medical Center from 1990 to 2000, when he was appointed Professor of Medical Oncology. He became Head of the Center's Department of Medical Oncology in 2003.

Dr. Giaccone played an influential role at the European Organization for Research and Treatment of Cancer (EORTC), serving as a member of the EORTC's Lung Cancer Cooperative Group since 1982 and as its Chair from 1993 to 2000. He also led several major clinical studies focusing on lung cancer and other thoracic tumors.

Dr. Giaccone was appointed Chief of the Medical Oncology Branch of the Center for Cancer Research of the National Cancer Institute in April 2007 where he was in charge of restructuring the clinical intramural program. In January 2013, Dr. Giaccone joined the Lombardi Comprehensive Cancer Center at Georgetown University in Washington, DC as the Associate Director for Clinical Research and the Director of Clinical Research for the MedStar Health Cancer Network’s Washington Region, and Professor of Medical Oncology and Pharmacology.

Dr. Giaccone’s research activity is mainly focused on the study of the biology of lung cancer and thymic tumors, and treatment of these tumor types. He has made seminal discoveries that have disclosed new ways to treat lung cancer and to diagnose thymic tumors. Dr. Giaccone has published more than 500 peer-reviewed papers and contributed to more than 30 book chapters.