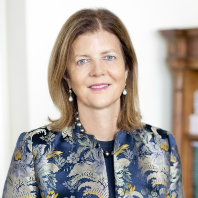 Mary E. D'Alton, MD, is Chair of the Department of Obstetrics & Gynecology and the Willard C. Rappleye Professor of Obstetrics & Gynecology at Columbia University Irving Medical Center. She also serves as Director of Services at the Sloane Hospital for Women at NewYork-Presbyterian. Specializing in maternal fetal medicine, the majority of Dr. D'Alton's practice focuses on patients with high-risk pregnancies due to complex maternal or fetal conditions. At NYP/Columbia, she has implemented a multidisciplinary, coordinated approach to manage the highest risk pregnancies at the Carmen and John Thain Center for Prenatal Pediatrics, which opened in 2010, and the Mothers Center, which opened in May 2018.

Her work to advance education, research, clinical practice, and policy development in women's health has won national recognition. In 2013, Dr. D'Alton was elected as a member to the National Academy of Medicine (formerly the Institute of Medicine). As co-chair of ACOG District II's Safe Motherhood Initiative, Dr. D'Alton has played a pivotal role in the effort to reduce maternal mortality and morbidity in New York State and in the national conversation about how to improve maternal health.

Honored with a Lifetime Achievement Award in 2006 by the Society for Maternal Fetal Medicine, she has served as its president and has held key positions in several professional organizations, including the American Gynecological and Obstetrical Society (AGOS) and the American College of Obstetricians and Gynecologists (ACOG). The author or contributor to over 200 publications, Dr. D'Alton is co-editor of Seminars in Perinatology and has served on the editorial board of ACOG's Obstetrics and Gynecology.