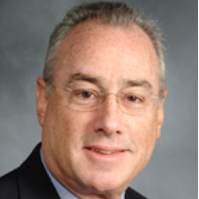 Matthew E. Fink, MD is currently the Louis and Gertrude Feil Professor and Chairman of the Department of Neurology at Weill Cornell Medical College, and Neurologist-in-Chief at New York Presbyterian Hospital / Weill Cornell Medical Center.  In addition, he is Chief of the Division of Stroke and Critical Care Neurology at NewYork-Presbyterian Hospital/Weill Cornell Medical Center, and Vice Chairman of the Medical Board. Dr. Fink attended college at the University of Pennsylvania, medical school at the University of Pittsburgh, and served as resident and chief resident in internal medicine at the Boston City Hospital. He came to New York and trained in neurology at the Neurological Institute of New York/Columbia Presbyterian Medical Center, and served as chief resident under Dr. Lewis P. Rowland. Subsequently, he joined the faculty of Columbia University and became the founding director of the Neurology-Neurosurgery Intensive Care Unit at New York Presbyterian Hospital and was appointed Associate Professor of Clinical Neurology and Neurosurgery while at Columbia. Prior to joining the faculty of Cornell, Dr. Fink served as President and Chief Executive Officer of Beth Israel Medical Center in New York, as well as Chairman of the Barbara and Alan Mirken Department of Neurology, Director of the Comprehensive Stroke Center, and Co-Director of the Hyman-Newman Institute for Neurology and Neurosurgery. He was Professor of Clinical Neurology and Clinical Medicine at the Albert Einstein College of Medicine of Yeshiva University. Dr. Fink was a founding member and chairman of the Critical Care Section of the American Academy of Neurology, and the Research Section for Neurocritical Care of the World Federation of Neurology. He is board-certified in internal medicine, neurology, critical care medicine, vascular neurology, and neurocritical care.  He has been elected as a Fellow of the American Neurological Association, the American Academy of Neurology, and the Stroke Council of the American Heart Association. Throughout his career, Dr. Fink has been involved in the education and training of students, residents and fellows in the field of stroke and critical care neurology, as well as an active participant in clinical research within this field. He is a leader in this new specialty, has lectured widely, and has published many research and clinical articles in the field of stroke and critical care. In addition, he currently serves as editor of the monthly publication, NEUROLOGY ALERT, and is a Past-President of the New York State Neurological Society.