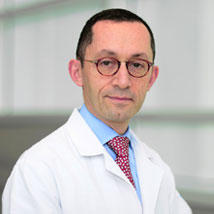 Dr. Pierre Saldinger is a board certified General Surgeon specializing in Surgical Oncology practicing at NewYork-Presbyterian Queens hospital located in Flushing, NY. He received his medical degree from the University of Basel Medical School, completed his residency in General Surgery, and his fellowship at Memorial Sloan Kettering Cancer Center. Dr. Saldinger is certified by the American Board of Surgery, a Professor of Clinical Surgery at Weill Cornell Medical College and is the Chairman of the Department of Surgery.

A distinguished and well published surgeon, he has expertise in the surgical treatment of cancer and benign disorders of the pancreas, liver, gallbladder, bile ducts and stomach. Dr. Saldinger has lectured nationally and internationally regarding surgery of the pancreas, bile duct and liver as well as on surgical quality improvement.