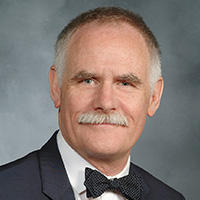 Dr. Robert J. Winchell, MD, FACS, is board certified in General Surgery, with added qualifications in Surgical Critical Care. He is a Fellow of the American College of Surgeons as well as a member of the American Association for the Surgery of Trauma, the Association for Academic Surgery, the Southwest Surgical Congress, the Society of Critical Care Medicine and the New England Surgical Society. Dr. Winchell is author of more than 50 scientific papers and book chapters, and has given over 100 regional, national and international presentations. He is an ad hoc reviewer for the Journal of Trauma and Acute Care Surgery, the Archives of Surgery and the World Journal of Surgery.Dr. Winchell has been deeply interested and involved in the development and evolution of trauma systems for his entire career. He has been involved in trauma center and trauma systems design and operation in a wide variety of settings covering the spectrum of system development. Dr. Winchell has dedicated almost two decades to the advancement care of the injured as a part of national public health policy, and the implementation of state and regional trauma systems based upon and supported by that policy.Dr. Winchell, MD received his undergraduate degree from the California Institute of Technology, his M.D. from Yale University, and did his internship, General Surgery residency, and Trauma and Critical Care Fellowship at the University of California, San Diego, where he remained on the faculty as Associate Professor of Clinical Surgery in the Division of Trauma through 1999. He was instrumentally involved in leadership roles with both the day-to-day operations and ongoing development of the San Diego County trauma system for over ten years and served as chair of the San Diego and Imperial County Committee on Trauma.After leaving the University of California, Dr. Winchell established and subsequently directed the Tacoma Trauma Center in Tacoma, Washington, which continues to operate successfully as a joint venture between two previously competing hospitals. He participated in the leadership, operation and ongoing development of the Washington state trauma system, serving on the state advisory board, and as chair of the Southwest EMS region.In 2001, Dr. Winchell moved to the Maine Medical Center and assumed the role of Head of the Division of Trauma and Burn Surgery in 2004. He remained in that position for 10 years, also serving as an Associate Professor of Surgery at the Tufts University School of Medicine. Under his direction, Maine Medical Center became a verified Level I trauma center for the first time in 2007. During Dr. Winchell’s tenure in Maine, he developed the Maine state system, serving as a member of the state advisory board and as a chair of the Maine State Committee on Trauma.After leaving Maine, Dr. Winchell served as Chief of Trauma and Visiting Professor of Surgery at the University of Texas Health Science Center at Houston and Chief of Trauma at Memorial Hermann -Texas Medical Center. He also served on the Trauma Systems subcommittee of the Governor’s EMS and Trauma Advisory Council.In July 2015 Dr. Winchell assumed his current post, joining the faculty in the Department of Surgery at Weill Cornell Medical College as Chief of Trauma, Burns, Critical and Acute Care and Director of the Trauma Center at New York-Presbyterian Weill Cornell Medical Center.In parallel to his clinical and research work, Dr. Winchell has had the honor to serve the American College of Surgeons Committee on Trauma for almost 20 years, first as a State Chair for San Diego County and for Maine, and currently as a member and part of the Executive Committee. His leadership and forethought have been instrumental to Trauma Systems consultation program of the COT since 2006, and he currently serves as Chair of the Trauma Systems Evaluation and Planning Committee. In that role, he has conducted expert consultation in 17 states and regions, serving as team leader for 13 of these. He is a leader in international trauma systems development, and founding representative from the American College of Surgeons to the World Health Organization’s Global Alliance for the Care of the Injured.