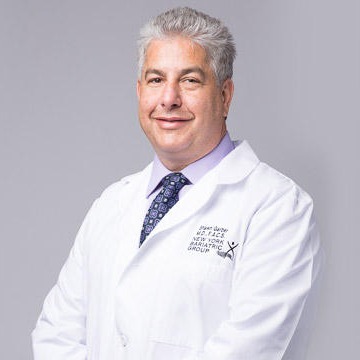 Dr. Garber is the Founder and Director of the New York Bariatric Group as well as the Chief of Bariatric Surgery for the entire Catholic Health System.

Dr. Garber is the only bariatric surgeon on Long Island and Queens who has performed more than 3,500 laparoscopic gastric bypass procedures and 3,500 Lap-Band procedures and over 750 laparoscopic sleeve gastrectomies. Dr. Garber helped develop the single incision Lap-Band and sleeve gastrectomy techniques and teaches other weight loss surgeons around the country this virtually scarless technique which he helped develop. Dr. Garber has one of the largest experiences in the world with this virtually scarless technique for Lap-Band and sleeve gastrectomy. He has been seen on Good Morning America, ABC news, NBC news, NY55 news and featured in the New York Times as the premiere bariatric surgeon in the New York area. He has been on many talk shows discussing obesity and bariatric surgery including The Dr. Oz Show, and Montel Williams with Carnie Wilson. Click here to view the videos. Dr. Garber was the only surgeon on Long Island listed in New York Magazine as one of the top laparoscopic obesity surgeons in the New York area and has been nominated by Castle Connelly as one the top surgeons in the US for over 6 years. Dr. Garber is also the only bariatric surgeon listed in Newsday’s Long Island Top Doctors Issue and performed the first laparoscopic gastric bypass and the first single incision Lap-Band and Sleeve Gastrectomy on Long Island. Dr. Garber is the only surgeon in the area performing virtually scarless single incision sleeve gastrectomy.

Dr. Garber is on the medical advisory board of ObesityHelp.com.